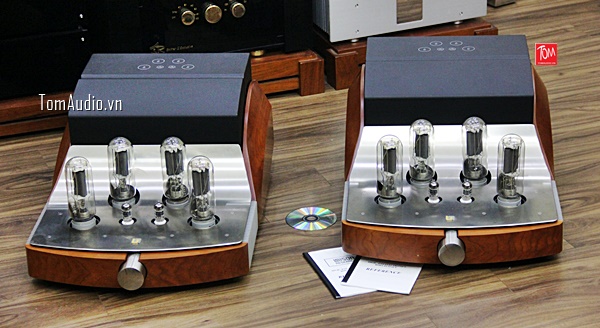 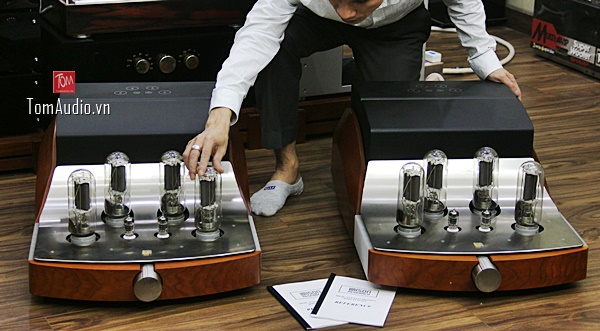 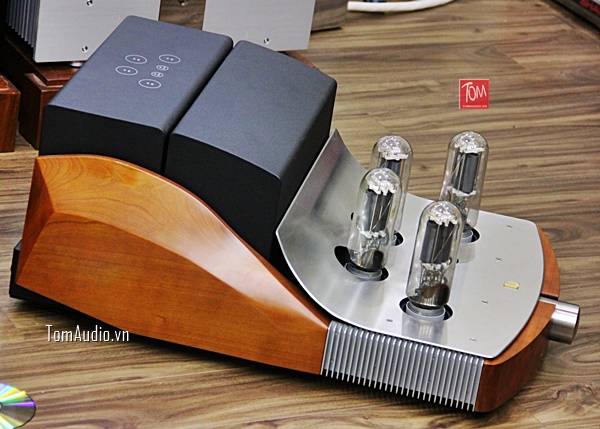 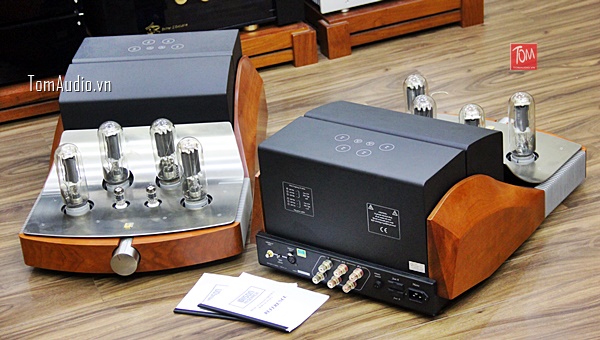 With the aim of satisfying this requirement, the Unison Research team began to evaluate the possibility of producing an amplifier which would incorporate the best of what we have learned from many years of experience with valve amplifiers. The idea was certainly an ambitious one: to design a single-ended amplifier with twice the output power of the most powerful product in the catalogue, and make it truly worthy of inclusion amongst models that have made the Unison famous throughout the world.

Since this demanding project was to be developed entirely by the Unison team, it was necessary to make several important decisions concerning the overall design. Our first realization was that the Reference power amplifier needed to consist of a separate monoblock pair of amplifiers.
As mentioned above, the Reference project began with a definition of the outline scheme. Being a power amplifier, the first question was to decide on the required output power. We decided on 80 watts from a quartet of 845 triodes in parallel, a level roughly double that of the most powerful amplifiers in the Unison Research catalogue. This requirement also dictated the choice of a two chassis solution, as a monoblock amplifier pair. The obvious advantage of this solution lies in the maximum separation between channels, but equally important was the need to keep the size and weight of each to a manageable level.

The next step was to define the circuit. In view of the limited amplification required from one power amplifier, maximum power is obtained with 1 volt (rms) at the input. Considering also the small amount of feedback typical of a Unison Research amplifier, the choice fell to a first stage consisting of two twin-triode ECC82s. The two triodes in a single valve operate in parallel giving reduced anode impedance which helps to give wide bandwidth, good driving ability, and distortion and noise levels which are generally reduced. The first pair of triodes in parallel is used for voltage amplification of the input signal, which is passed on to the second stage. This too consists of a pair of ECC82 triodes in parallel but this time the triode bias has greater current to enable these valves to act as drivers for the power triodes. A power supply of around 600V allows this stage to have an adequate voltage swing. The output from the driver stage feeds the four grids of the 845 triodes, whose anode current in turn feeds two output transformers working in parallel.
The 845 valve was chosen in this project first and foremost for its renowned sound quality, but also because it is a recognizable symbol used in many classic products from Unison Research including the famous ABSOLUTE 845.

Next we outlined the structure of each single amplifier. We decided on an input stage based upon the twin triode ECC82 used as a voltage amplifier, followed by a driver stage again using a twin triode ECC82 and biased in such a way as to be able to adequately drive four directly-heated 845 triode valves. Finally, it had to have two very large output transformers working in parallel, and the whole amplifier should have a minimum amount of feedback.
Manufacturing output transformers of this size is certainly not an easy matter and must be undertaken with great care as well as strict adherence to the criteria which have been established at Unison Research over many years of valuable design and production experience. From the very beginning, Unison Research has dedicated itself to the design, development and manufacture of output transformers, certain in the knowledge that good sound reproduction from valve amplifiers is highly dependent on the quality of these critical components. Add to that the fact that few other manufacturers in the world are capable of designing and building their own transformers as we can. Thanks to these specially made output transformers, it has been possible for Unison Research to produce an output stage for the Reference power amplifier that consists of four 845 valves in parallel single-ended configuration.
Each power triode has its own DC heater supply taken from a separate transformer winding. This ensures that there will be no interference between the four triodes and any AC component present in the mains supply. The bias system for the triodes is also fully independent for each valve in order to compensate for whatever changes take place in the characteristics of each one during its lifetime (which may vary from valve to valve). Four independent circuits regulate the four grid voltages to maintain an optimal level of anode current for each triode.

In building an output stage consisting of triodes in parallel however, careful selection and matching of the valves themselves is of paramount importance. However, this only partially solves the need to maintain homogenous characteristics among the different valves since during the ageing process the changes in each valve is not uniform. This leads to an eventual imbalance in the output stage with power loss and an increase in the level of harmonic distortion. To address this problem, we have been able to create in our own laboratory a special electronic circuit which monitors the bias of each individual power valve, making continuous adjustments for those parameters which are subject to drift. This continually optimizes the working state of the valves themselves, allowing them to continue an optimal sound quality even after many years of use. One incidental benefit from this circuit is that the warm-up time between switch-on and best performance from the amplifier is appreciably reduced. Each triode is mounted on a ceramic base beneath which is situated the printed circuit for control of individual bias, which it carries out by monitoring the anode current value and power supply to the filament.
Each amplification stage is entrusted exclusively to valves, and all operate in pure class A. Negative feedback is returned to the cathode of the first valve, and its value (approx. 8dB) was chosen after rigorous experimental tests and especially by many hours of listening tests in a variety of situations.
Just as for the bias control circuit described above, each amplifier function is given its own separate printed circuit. There are eleven such boards for each amplifier. The anode power supply for the power triodes is regulated at 900V by a circuit expressly designed for this amplifier. Four power MOSFETs, a double bank of capacitors and a total of four separate windings divided between the two transformers form a system for anode voltage regulation similar to that provided by a battery; its benefits are a total absence of residual undulation, low output impedance and high current supply capacity.
Once we decided on the overall structure of the amplifier, the next real challenge was to design the power supply system. In order to provide a power supply appropriate to an amplifier of this level, each monoblock has two 400-watt mains transformers with a total of 16 secondary windings. The anode voltage for bias control of the four 845 valves comes from a power supply stage able to guarantee a regulated supply at 900V. The regulation circuit uses four power MOSFETs and completely eliminates any residual AC components which may be present in the rectifier circuit in a more efficient way than even a high value inductance filter can achieve.
The problem of power supply for the Reference was studied at great length to establish the possibility of providing an anode supply similar to what might be obtained from of a bank of batteries. After much research and experimentation we were able to come up with a valid solution. The MOSFET stage is used to separate the rectified voltage of the four secondary windings from the power supply voltage for the output stage anode tension. Its job is to regulate the filter capacitor load current, which is therefore fully continuous and not impulsive as in traditional rectification systems. One further significant advantage is that the output capacity of the power supply is now used exclusively for signal amplification components, having totally eliminated those associated with rectification. The result is effectively a multiplication of the total filter capacity. In this way the anode supply developed for the Reference can be considered to have a capacity far greater than any normal power supply, able moreover to behave like a real battery, something that would be impracticable for an amplifier of this power rating.
The two power supply transformers in each Reference monoblock are not normal transformers but are designed and made to the same standard and the same materials as we use for output transformers. This is not only as a guarantee of reliability but more especially to allow the amplifying stages to operate in ideal working conditions. It is important to remember that the energy that flows from the loudspeakers is supplied by the amplifier`s power transformers. The transformers moreover have no less than 16 secondary windings in order to supply every one of the amplifier`s active components, thus drastically reducing the phenomenon of interaction. Both driver and amplification valve filaments are supplied with DC current. The power valves, on the other hand, require a significantly greater heater power and are therefore provided with DC via a rectification stage from an independent winding. The rectification circuits include Schottky diodes which are more efficient and less noisy than traditional rectifiers commonly used in other applications.

Each amplifier is equipped with six large gold-plated output terminals able to accept every type of loudspeaker cable, and allowing connection in bi-wiring for both 4 and 8 ohm loads. The input connection is also of best quality and fully gold-plated.
The front-mounted power-on switch does not act directly on the mains supply, but commands a system of two power relays, one for each mains transformer. These relays, placed close to the power transformers enable the internal mains cabling to be as short as possible so as to avoid the presence of mains borne disturbances affecting the delicate amplifying stages.
In the Unison Research Reference power amplifier, nothing has been left to chance–from the choice of components, the control knobs and the wooden parts to the design of the chassis and the circuit boards. The power-on switch is machined from non-magnetic stainless steel. The wooden parts, which contribute greatly to the visual appearance of the amplifier, also play another carefully calculated role – that of damping out induced resonance in the metal chassis. Valves are sensitive electronic components and can be microphonic, therefore care taken in this aspect of design can prevent resonance-generated signal disturbance with clear benefits to sound quality.
The cover consists of a non-magnetic stainless-steel screen, which has low heat conductance to ensure that the heat generated by the four 845 valves does not reach the underlying circuitry. The benefits of this are realized in greater stability and sound quality as well as better long-term reliability. Indeed, to ensure the best performance and reliability, all the components used in the Reference have been carefully selected from the non-inductive filter capacitors supplied by the Italian ITALCOND and German SIEMENS companies, from the pure ceramic valve bases to the printed circuits in extra-thick vetronite. The cabling is carried out with high-quality wire. Even the dimensions of the circuit boards and placement and size of ventilation holes have been carefully calculated to ensure that internal heat build-up does not occur, again in the interests of reliability.
The circuit boards have been designed with extreme care taken over signal and power supply paths and their relative thicknesses. All earth tracks are star wired and the signal paths are widely spaced, again in the quest for maximum separation and therefore minimum interference between signals.
All of this is a result of Unison Research`s many years of experience. It’s also your guarantee that this new Reference is a power amplifier of superb performance, and the pride of our current production